Here are the two biggest tomatoes so far this season. The yellow one on the left is 1 lb 11 oz Gold Medal and the red one on the far right is a 1 lb 10 oz Big Zac. I got second place at the State Fair with a little smaller Big Zac tomato but if I had found this Gold Medal I would have had first. It’s ok though as I took 5 first places, 1 second place and 1 third place at the State Fair. Can’t be too greedy.

Yesterday I planted 6 giant tomato seeds as well. The seeds came from tomato plants that produced anywhere from 5.5 lbs-7 lb tomatoes! Hope I get some BIG ones! I’m trying to break 3 lbs this year! Nothing better than a BLT where the juice from one of these tomatoes runs down your chin! One slice of tomato covers the whole slice of bread.

I’ve been busy in the garden! It is ALMOST  finished. I have 8 more tomatoes to plant tomorrow that I forgot to get that are some of my standards at the SF Farmer’s Market. OPPS! But they will be ready in time.

Two weekends ago I had 7 friends/family help with planting the majority of the tomatoes. A great big THANK YOU to all that helped-Elodie, Flynn, Ronnie, Lava, Tom, Sharon and myself! I couldn’t have done it without you! I also have a few more flower seeds to plant by the entry. Otherwise it’s done-FINITO! Yea right-there is always something to do in the garden! Here are some of the things happening in the garden: 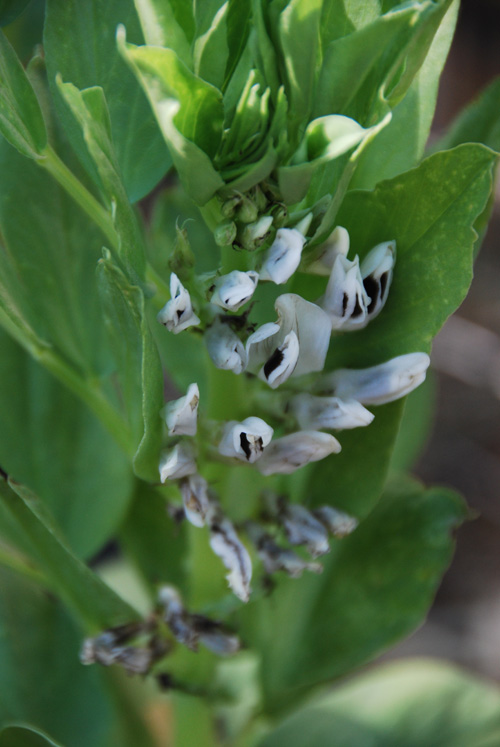 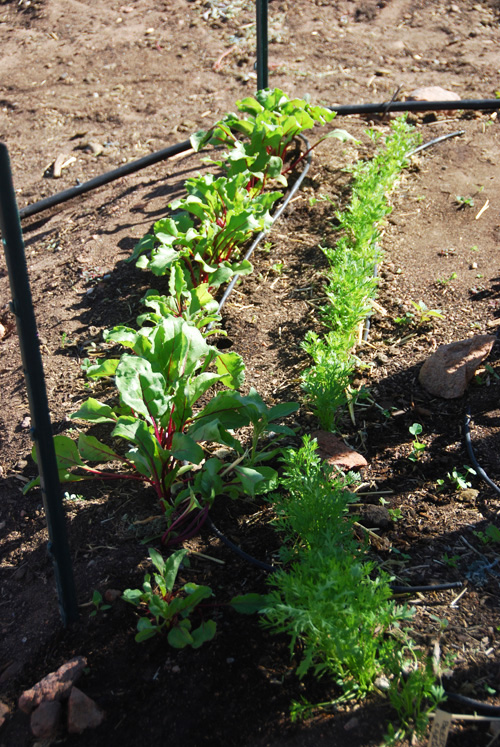 The beets and carrots are coming along quite nicely. They are outside the pole bean tent area and will fill in nicely 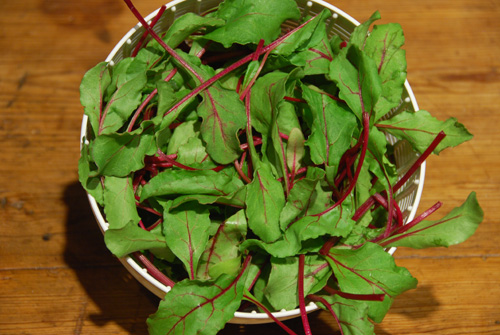 Here are some beet greens I harvested while thinning out the beets to give them room to grow. They are yummy in a salad and are so beautiful. 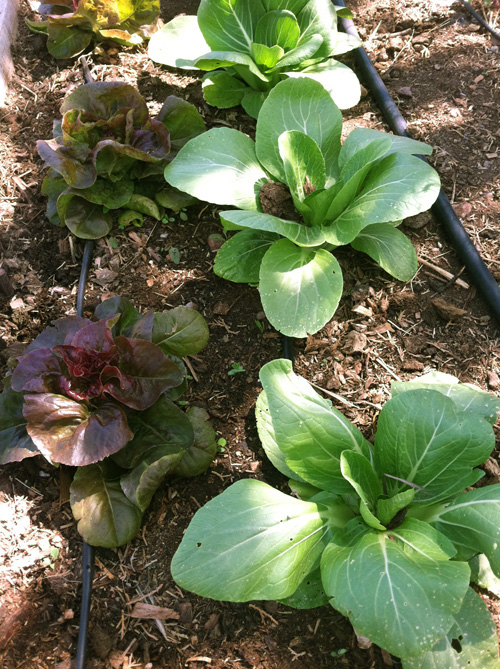 In the shadiest part of the garden I planted some bok choi and lettuce and have had it covered with row cover since planting to help keep them from the heat and bugs. They both are looking great. I’ve never grown bok choi before so I’ll have to research when to harvest as they are getting to be pretty big and won’t like the heat for too long.

The fennel bulbs are getting bigger and are almost ready to harvest. Maybe another 2 weeks. They also won’t do well in the heat. I wonder if they will get as big as the ones in the grocery store.. 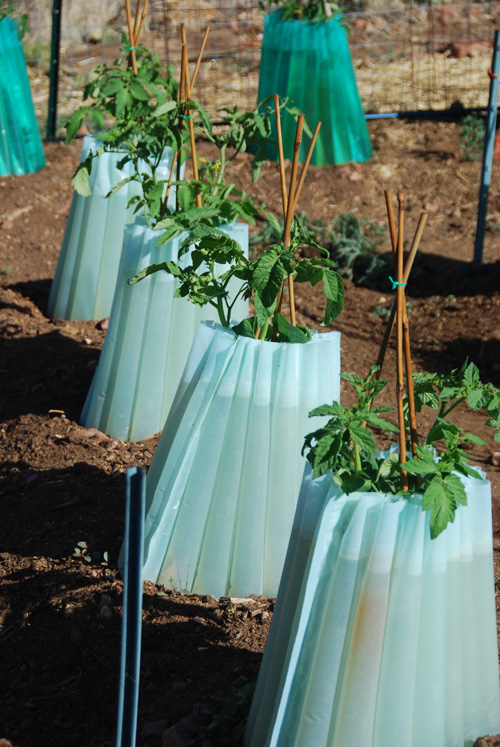 About half of the tomatoes I previously planted are growing out of the top of the wall of waters and I need to take them off before it gets too difficult.

It’s been fun growing some early stuff. The bok choi, fava beans, fennel and lettuce are more cool season crops and will have to be harvested soon because of the heat. Probably all of them will be harvested BEFORE July.

I also have potatoes that are growing through the roof, strawberries that are being harvested and rhubarb that is ready to pick but will save that for other posts.

Hey! I just got a notice for a giant tomato contest for anyone interested in looking into submitting one of your BIG tomatoes this year. The website-PlantYourOwn.com is running its 1st ever giant tomato competition. Click here for details. The contest is simple……just grow a big tomato!!! Signup ends March 1st, 2012. I might have to join!

Tomato seeds fermenting in a jar. On the plate are some dried seeds.

I don’t collect hybrid tomato seeds as they may not grow back true.What that means is they may revert back to one parent or the other that they were crossed with. Heirloom tomatoes will grow back true.

The only heirloom tomato seeds I collect are from my giant tomatoes as I’m trying to get some seeds that do well in our high desert and give me some big, really big tomatoes. Last year I got 3 tomato seeds from a giant grower who grew a tomato over 7 lbs in Ohio. This year I got a pretty large tomato from one of those seeds. I kept the tomato which measured 19 inches in diameter and almost weighed 3 lbs and recently got the seeds. I will try some of these seeds next year as well as other big tomato seeds that I got from another grower this week.  Here’s how you can collect your favorite heirloom tomato seeds.

To collect tomato seeds, cut the tomato open, squeeze and scrape out all the seeds and put them in a little jar with some water. Then put the lid on. Try to not get too much pulp in with them. The seed/water mixture will start to ferment in a couple of days and it might bubble a little which is good. The fermentation will remove the slime on the seeds and the seeds will fall to the bottom of the mixture. When almost all the seeds are on the bottom, pour out the liquid, seeds and pulp through a fine sieve, removing the pulp. Keep rinsing until only the seeds are left. Spread them out on a paper towel to drain the excess water and then put them on another paper towel to finish drying. Before the seeds dry completely I move them around so the paper doesn’t stick to them. After they are thoroughly dry, put them in a ziplock baggie, label and store. You can keep any heirloom tomato seeds this way.

My only concern with collecting tomato seeds is if you plant cherry tomatoes too close to the heirloom tomato you want to keep, they may cross-pollinate so think about where they will be in your garden next spring and don’t plant them right next to each other. Tomatoes aren’t pollinated by bees but by the breeze or are self pollinating. Tomatoes originally came from South America and honeybees came from Europe or Africa so tomatoes aren’t native plants to the honeybee hence they aren’t interested which actually makes pollination easier to control.

It is a good year for me at the State Fair for my giant veggies! I got 5 blue ribbons and first places for all my entries-giant zucchini, giant pear gourd, giant long gourd, giant tomato and giant greenie) and 2 I entered for Elodie ( a second giant zucchini and a tomato) took second places and got red ribbons. We still have bigger veggies waiting for the national contest in Colorado in October…

Today I dropped off my entries for the giant vegetable categories at the New Mexico State Fairgrounds which opens this weekend.  I didn’t submit a giant pumpkin this year as I only have 2 going. MAX and BABY HUEY (who I’ve been watching put on 9 lbs a day now for a while). Lava went down to Albuquerque with me to help unload. Here are the candidates I did submit:

This tomato is from a Big Zac variety and is 19.25 inches in circumference and 2 lbs, 14.4 oz in weight. It is still turning red but has completed it’s growth. I didn’t see anything bigger down at the fair. We will see..

This giant ‘greenie’ squash is ‘The Hulk’ and estimated weight is 157 lbs and has put on 7 lbs a day in the last 5 days. Here it is in the back of the Prius. It barely fit in! I still have 2 bigger greenies growing in the garden for the big weigh-off.

Here is the giant Long Gourd, ‘Digi’, which is measured by length-it is 59.5 inches long-basically the length of the back of the Prius with the seats down. It had stopped growing. I still have some longer ones still on the vine that I’m saving for the big contest. In the foreground is the whitish pear gourd.

Here is the third biggest giant marrow (zucchini), ‘Little Boy’, which is 47 inches long and 27 inches wide!  It ended up weighing 43.5 lbs which was bigger than the one I took last year to the fair.That one was 34 lbs. I have bigger ones in the garden yet to come for the big contest.

And lastly here is the giant Pear Gourd, ‘Gourdo’, which is 31 inches wide and 41 inches in length. You can’t see it too well here but it is huge. It weighed 102 lbs on the scale at the fair! I debated whether to take it today or leave it for the big contest and decided to take it as it will be for exhibition only up at the big contest as they have no category for it. At least at the state fair I will get a ribbon…