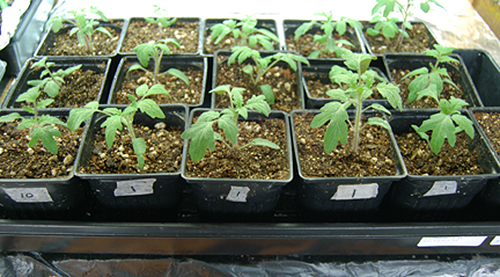 Why would any of us bother to start seeds when we can go to nurseries to buy the plants. Well, I do both. I can only speak for myself but I have grown all kinds of unusual vegetables that I couldn’t find at the nursery and I like to try something new and different every year. Besides being ‘The Tomato Lady’ here at the Santa Farmers Market, I really like to try some new heirloom tomatoes every year along with my tried and true varieties. Every year some new variety gets on my ‘all-star’ list at the end of the season while others don’t make the cut. In fact in some years, many don’t make the cut-I’m picky as hell about my tomatoes. If I don’t like them I don’t grow them again. Luckily, I like many tomatoes but they’ve got to taste good!

Some of the unusual varieties I have tried and loved eating are Atomic Red carrots, Cosmic Purple carrots, Craupadine Beets, Tarabais beans, Rattlesnake beans, Emerite beans, Fava beans, Parisian cucumbers, Poona Kheera cucumbers, and about 25 different varieties of heirloom tomatoes (too many to mention). None of these are sold as plant starts in the nurseries but you can buy some of the seeds at the nurseries and some seeds you have to order online.

Article first published as The Mystery of the Calabacita Squash on Blogcritics. Story by giantveggiegardener. 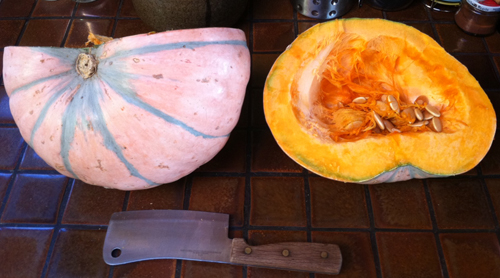 As a gardener and a cook, I’ve been searching for a particular squash seed-the Mexican Calabacita. It was the original squash used to make the famous ‘Calabacitas’ dish of squash, corn, onions and green chili here in New Mexico. Most of us now use zucchini to make this savory dish because of it’s availability, but here at the Santa Fe Farmers Market, you can buy the Calabacita squashes in early summer and then by mid summer, they are gone. They are little green squashes with soft skin and teeny weenie seeds-too small to harvest. I researched it and found that the squash originally came from Mexico but not a lot of information is out there on it. No seed catalogs have it. None of my gardening friends have any seeds. I couldn’t find it anywhere.

Then two years ago while on vegetable gardening forum here in Santa Fe, I met another gardener and during the course of our conversation after the forum, the mysterious Calabacitas squash came up. I told her of my difficulty finding the seeds. She told me she had gotten some Calabacita seeds from another farmer whose family had been here for generations.  She offered me a few of the seeds. Finally I would get some seeds! So we emailed each other and I sent her an envelope to send me some but they never came. I went by the Farmers Market where she sells produce but we kept missing each other. Another season passed and still no seeds.

This year, on the last day of my season as ‘The Tomato Lady’ at the Farmers Market where I sell heirloom tomatoes, I went by her booth and mentioned maybe I could get some of those seeds for this upcoming season. She said,” Why not buy one of the squashes now?” When she pointed them out, I said, “That’s one of them? It doesn’t look anything like the ones earlier in the season” and she remarked, “Yes that’s one of them. They are actually a type of WINTER SQUASH. We just pick them when they are really young and immature and have no seeds”. That explains it! Why I could never get any seeds from them. That is why we don’t see them later on in summer-if you let it keep growing; it will become a mature winter squash. There were several there at her booth with different colors. Some were green with orange stripes and some were salmon color with green-grey stripes. She said there really wasn’t any difference in the taste.  I ended up with the salmon-green striped one. It weighed about 15 lbs and has a squat oval shape outside and lovely orange color inside. It smelled like a cross between a cucumber and a melon.

I got the seeds and roasted the squash. To roast it, I quartered it and rubbed some oil on it and put it on a cookie sheet. Then I added a little water in the bottom of the pan so it wouldn’t dry out. I put it in the oven at 350° and placed some aluminum foil loosely over it so it would not burn. It took about an hour to cook. Afterwards, I put the flesh in a freezer Ziploc and will later cook squash lasagna with béchamel sauce.

So Calabacita squash can be used to make Calabacitas in early summer or later in the fall used in winter squash dishes.

Here is a recipe for Calabacitas from New Mexico:

1 lb or more Calabacita squash or any summer squash, cubed

Sauté the onion, add the squash and corn and sauté till tender.

Tomato seeds fermenting in a jar. On the plate are some dried seeds.

I don’t collect hybrid tomato seeds as they may not grow back true.What that means is they may revert back to one parent or the other that they were crossed with. Heirloom tomatoes will grow back true.

The only heirloom tomato seeds I collect are from my giant tomatoes as I’m trying to get some seeds that do well in our high desert and give me some big, really big tomatoes. Last year I got 3 tomato seeds from a giant grower who grew a tomato over 7 lbs in Ohio. This year I got a pretty large tomato from one of those seeds. I kept the tomato which measured 19 inches in diameter and almost weighed 3 lbs and recently got the seeds. I will try some of these seeds next year as well as other big tomato seeds that I got from another grower this week.  Here’s how you can collect your favorite heirloom tomato seeds.

To collect tomato seeds, cut the tomato open, squeeze and scrape out all the seeds and put them in a little jar with some water. Then put the lid on. Try to not get too much pulp in with them. The seed/water mixture will start to ferment in a couple of days and it might bubble a little which is good. The fermentation will remove the slime on the seeds and the seeds will fall to the bottom of the mixture. When almost all the seeds are on the bottom, pour out the liquid, seeds and pulp through a fine sieve, removing the pulp. Keep rinsing until only the seeds are left. Spread them out on a paper towel to drain the excess water and then put them on another paper towel to finish drying. Before the seeds dry completely I move them around so the paper doesn’t stick to them. After they are thoroughly dry, put them in a ziplock baggie, label and store. You can keep any heirloom tomato seeds this way.

My only concern with collecting tomato seeds is if you plant cherry tomatoes too close to the heirloom tomato you want to keep, they may cross-pollinate so think about where they will be in your garden next spring and don’t plant them right next to each other. Tomatoes aren’t pollinated by bees but by the breeze or are self pollinating. Tomatoes originally came from South America and honeybees came from Europe or Africa so tomatoes aren’t native plants to the honeybee hence they aren’t interested which actually makes pollination easier to control.