Being the Tomato Lady I have lots of tomatoes. One of the things I’ve done with my tomatoes, especially my older ones is making tomato tapenade. It’s easy to do and is so yummy you’ll want to make more with any tomatoes you can get your hands on at this time of year. The picture above I have mixed up all kinds of tomatoes.

2. Take a cookie sheet and cover it with a big sheet of foil to protect your cookie sheet. Don’t try to piece two pieces together, it won’t work. The tomato juices will leak between the two pieces and what a mess it makes. I first tried it with parchment paper underneath and it was worse so don’t try that either. I learned the hard way and ruined a cookie sheet. Then I spread some olive oil on the sheet so the tomatoes don’t stick and cut my tomatoes in half and put them on the cookie sheet.

3. Put salt and pepper on the tomatoes and crush up some garlic (lots) and put that on top of the tomatoes.

4. Put fresh thyme on top of the tomatoes. 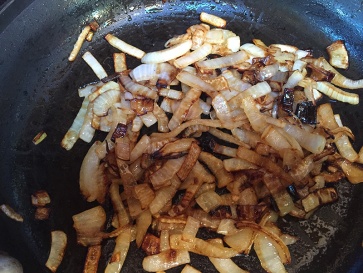 5. Then (this is optional but so good) Slice an onion or two and saute it in olive oil until soft and carmelized as above. Then spread the onions on top of all of it. Now I have made this both with and without the onions and it is definitely better with the onions but is really good without it too if you want to save more time.

6. Drizzle some good quality balsamic vinegar and then a little olive oil over it as well.

7. Cook and check often till soft and slightly caramelized. I start with half an hour and then keep checking every 15 minutes till done. Should take between 1-2 hrs if your tomatoes are bigger or juicy. There will be some black on the edges and that’s OK but watch closely as it gets closer to done as it can overcook quickly and the whole thing could burn black. A little black good, a lot of black bad. I scrap off the tomatoes (skin and all) off the foil and viola its done! I don’t puree it as I like it chunky and the skins are soft enough that you don’t even notice them.

8. I make some crostini out of some french bread toasting the slices till slightly crisp on the outside.

9. Then I spread some chevre goat cheese on the crostini and put a spoonful of the tomato tapenade on top. Sometimes I put a Kalamata olive on top, sometimes not. Divine!

Two cookie sheets makes about 2 cups of the tapenade. Refrigerate for immediate use or freeze or preserve it using a canning method for longer storage.