This year I have had a rodent problem in the garden, two years ago it was an ant problem. Now the ants are under control but the mice and packrats are out of control even though I continue to trap them and I’ve gotten a lot of them. I’ve never had a problem like this before in my veggie garden but luckily I have had a super productive year.

Actually next year, 2021, is officially ‘The Year of the Rat’ in the Chinese Zodiac but it might as well be this year. The mice and rats have been eating holes in many of the veggies. 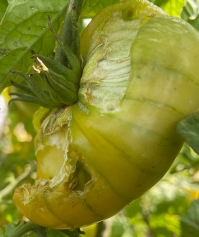 Tomatoes-My tomatoes have been hit hard but thankfully I have lots of them. I think rats are destroying some of my tomatoes and on other tomatoes there are little bites so I think they are mice-either way I can’t sell them. I’d be thinking, “I will wait one more day to harvest some particular tomato”, and then the mice/rat gets it first so I’ve had to resort to taking them a few days early and let the tomatoes finish ripening inside the house. I have too many tomato plants to completely wrap each plant to keep them out. Very frustrating.

Peppers- I have to cut out part of the peppers that has been eaten too. They eat a hole at the top of the pepper and get the seeds. They don’t seem to care if the peppers are still green or red. So I’ve resorted to tacking down the pepper bed with some hail netting and using 2″ x 4″ boards to keep the netting snug at the bottom on the ground so they can’t get under it. So far so good. 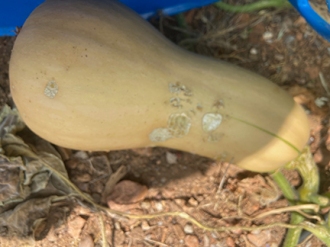 Butternut squash-Then there are the butternut winter squash. They are almost ready to harvest. I’m waiting for the skins to get that beautiful butterscotch color. Well some mouse has been attacking them too. They nibble small holes in some of them. So I’ve resorted to completely wrapping each butternut squash in pieces of row cover to keep them from getting them.

I have not been able to plant any lettuces in my lettuce shade garden this season either. They first ate all my Fava beans last spring and so I have had to forgo growing lettuces in that area. Instead I’m going to plant the lettuce that I’ve started this fall into my covered coldframe up by the house. In a few more weeks I’ll also plant lettuce in my greenhouse (it’s still to warm inside the greenhouse to put them there but I am ready when it cools down more).

So it looks like either trapping them or wrapping your plant up tight to keep them out works. I would never use poison as we have a cat that also hunts them and our neighbor’s dog too. They could die from eating a poisoned rodent. Plus birds of prey like hawks would die also.

I have heard from other gardeners in this area that they too have had rodent problems this year. How about you? Have you had problems with rodents in your veggie garden this year?