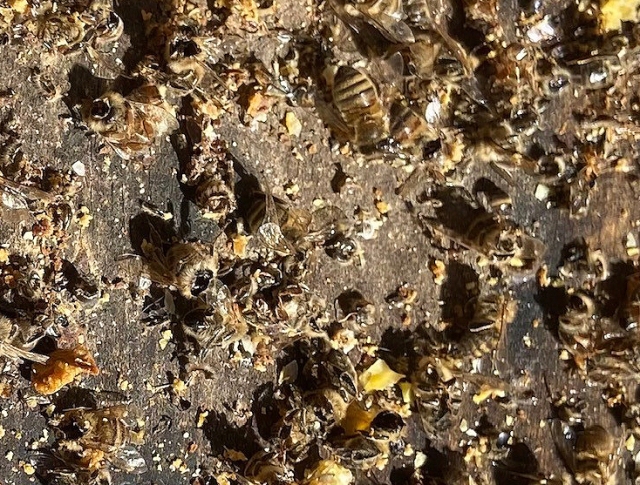 We found the bees dead on the bottom of the hive.

Beekeeping in Santa Fe area can be tough

The bees died in our second hive this winter which we discovered a couple of weeks ago. They left 8 bars of honey so it wasn’t from lack of food-they originally had 16 bars. I think they didn’t have enough bees in their colony going into winter to keep them warm but not really sure why they died-just a guess. No Varroa mites. No obvious signs of problems.

Our first hive which did so well last summer got robbed out of honey by other bees when their numbers went down from wanting to swarm so much. We ended up splitting that hive 3 times. We could of let them swarm (which any good beekeeper would try to discourage them from doing) so we split the hive to keep them from swarming. Bees want to swarm when they are feeling good-when the number of bees inside the hive are growing and they need more room. Kinda like outgrowing your apartment. This is a normal thing to do. Bees wanna swarm-Beekeepers split the hive. You don’t want half your hive going off and settling under someone’s portal. If we hadn’t split them, they would swarm anyways and then you lose all the bees in the swarm.

Honey saved from bees-33 jars but we already gave away several jars in case you count!

When we discovered they died and left all this honey, we filtered it and jarred it-33 jars! It is so sad for me when I see all those jars of honey when they worked so hard to make it. But it won’t go to waste. I don’t think we have harvested honey in about 4 years. You have to leave enough honey for them every year to get through winters here and it has been slim pickens with not that many blossoms because of all these droughts. Still, they did produce a good amount of honey.

Here is a little Honeybee facts-more with some interesting info on honeybees. Did you know that a single bee produces 1/12 of a teaspoon of honey in it’s lifetime! That’s all. This should make you appreciate the bees the next time you use honey in your tea or on your toast.

Yesterday I ordered more bees for this season. They seem to live 2-3 years here, so we will start over with them again. Northern NM is such a 😒 hard place to raise bees!

We are beekeepers and love our bees, their pollination of our plants and in some years the honey they provide. Plus we want to support them by not using chemical pesticides or fungicides.

This spring our bees were starting to outgrow their digs and were planning to swarm. How do I know? They made queen cups and started laying eggs in them and producing queen larvae. Once they decide to make a new queen, it is hard to turn their thinking around. So when we saw a queen cup with a developing larva and royal jelly in it and another queen cup with a new egg in it, we knew they would swarm and split their hive unless we split the hive before they did.

Swarming is good thing for a bee hive. It means it is doing well and has too many inhabitants and some need to move on. So we found the existing queen and transferred her and some brood and honey and pollen bars to an empty hive we had. Great! They seem to be doing well. So now we have two hives. But there were still queen cups in the original hive with about 10 developing larvae in them. We thought the other bees would take down the queen cups.

We thought that would be the end of it but no, there’s more to the story. Last weekend, I was out in the part of the garden closest to the first hive and noticed they were getting very noisy and started leaving and circling around in a great mass of bees and I knew they were going to swarm. I assume that one queen hatched and saw all the other queen cups with larvae in them and decided to leave with about half the hive before the others hatched. A hive can only have one queen and when a new queen hatches, it will go along and kill off any other queens that are ready to emerge with it except this one was quite further along in it’s development while the other larvae were not very developed yet.

The swarm ended up on a tree branch about 30 feet away and had formed a long ball of bees about 30 inches long by 12 inches wide where many thousands of bees had gathered. I’m guessing about 30 thousand! From there the swarm sends out scouts to find a new home in which to move to. The swarm waits to hear the reports from the scouts before moving again which can take from 3 hours to 3 days depending what the scouts find. Of course we suited up but when the hive swarmed, they are the most docile as they are out of their element so to speak. We ran over to another empty hive we had previously set up and put some more bars of brood and nectar in it from the original hive.

Then we went back to the swarm and I cut the branch down while Elodie held a big tupperware container underneath them and they fell  about six inches with the branch into the box. We then carried the box over to the new hive and put them inside. Hopefully they are happy and have a good queen to get them going. The original hive now has a lot fewer bees in it so hopefully this is the end of swarming. It is exciting we caught them before they left the property but also it is a little newvewracking too! Now we have three hives!