Went on our last flyfishing trip of the year to Colorado and New Mexico last week after our freeze here in Santa Fe that killed off the veggie garden the week before. I brought the last few tomatoes (all cherry tomatoes) on the trip and was lamenting that I would get no more home grown tomatoes until next season as I don’t eat store bought tomatoes.

In a bowl I cut them in half, added avocado and chunky feta cheese and drizzled a little olive oil over them. OMG! these tomatoes were so good and I was sorry to see them go. I really enjoyed every last bite! I wasn’t ready for the tomato season to be done as I won’t get any till next July or August.

When I got home, I went back out to the now dead garden and found more tomatoes that had escaped the freeze that were deep inside the plants and I guess the foliage saved them! I will have more tomatoes even into November. So now as they say, I’m a happy camper! 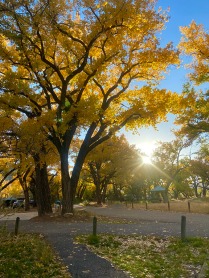 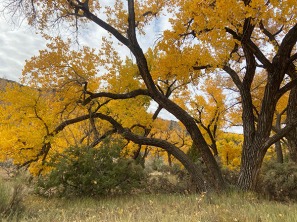 On the flyfishing trip the colors of the cottonwood trees up at the San Juan River below Navajo Dam, New Mexico were spectacular! Went up there at the peak of the fall color. The colors were unbelievable and I want to share them with you all.