Well I knew it would be too good to be true! The tomato hornworms are here-late but here. Picked off about 15 today that were found on the tomato plants. Boy are they hard to see. Great camouflage artists. I haven’t been in the garden much this past week due to a lot of art events around the SOFA show that just ended here in Santa Fe. As a result, three of us-Caleb, Elodie and myself found about 15 hornworms on the tomato plants. The hornworm is the larva of the Sphinx moth (also called the hummingbird moth but not related to hummingbirds). I was hoping that maybe they wouldn’t show up but they’re here! They can be seen in the top of the plants, not deep in the interior, thank god, where I wouldn’t be able to find them and they are almost inevitably always found hanging upside down on the branch they are munching on. When I find them, I pick them off  (wearing gloves) and under my shoe they go! I think their instant death is better then giving them to the chickens who would peck them to a tortuous death. I do try to be humane in their demise! They aren’t hard to control by handpicking, it just takes a little time. Glad one never finds more than one or two in each plant. So tomorrow and everyday this week I will go hornworm hunting until I can’t find anymore..

I haven’t seen any tomato hornworms yet which I think is unusual for this time of year. I looked up in my blog posts from last year to see when the tomato hormworm showed up- they appeared on July 8th. And come to think of it, I haven’t seen any Hummingbird moths or Sphnix moths either yet. Maybe the -20°F weather we had last winter killed the larvae! We’ll see.

I’ve found some tomato hornworms in the garden this morning. I picked them off and gave them to the chickens. Here is some information about them. This pale green caterpillar has white and black markings, is 3 1/2 to 4 inch long and is the larval stage of the Sphinx moth.

It is also called the hawk moth or hummingbird moth.  It is called the hummingbird moth because of it’s long “beak” which is not really a beak at all, but a slender, tubular feeding and sucking organ. It is not a hummingbird but an insect. It is a grayish-colored moth with a wing spread of 4 to 5 inches. I see it visiting my flowers at dusk and at night. It is attracted particularly to purple flowering plants. The moth is not harmful to your plants only as the larva caterpillar-the tomato hornworm. A friend of mine called me to say her plants were being visited by the Monarch Butterfly and wanted to know if they would hurt her tomatoes. The answer is no, the Monarch Butterfly lays it eggs on milkweed and when it is a caterpillar feeds on milkweed and feeds on nectar from other plants when it is an adult.

I noticed a couple of things about the hornworm today. First I got out early and caught it sleeping. At least I think it was sleeping as it didn’t move for a long time and it was still really chilly outside (I thought maybe it needed warmth to get up and going or perhaps it had a hangover from eating so many tomato leaves!). The first thing I do after looking to see if the plants look good (as in no disease showing up) is to see if any of the leaves are eaten. The hornworm usually start feeding from the highest part of the plant first. If I see that, then I also look for their poop (called frass) which are quite large pellets about 1/8 inch in size. You can see it sometimes on the branch or on the ground. The hornworms are hard to see as they blend in so well with the foliage but keep looking around the damaged areas and you will find them. Anyways the 3 times I’ve seen them so far this year, they all hang upside down on the tomato branch-so look for them that way. I don’t like to handle them with my bare hands. I usually have gardening gloves on so I’m not so squeamish about picking them off. They are so large they give me the creeps but they are quite beautiful. I will have to do more inspections to catch them.

I luckily haven’t had huge amounts of them so I prefer handpicking them but if I found I had tons of them, I would spray with Bt for caterpillars. Bt is short for Bacillus thuringiensis. It is a live bacteria that kills caterpillars only. It doesn’t harm bees, or birds or humans-only caterpillars. It is perfectly safe for organic growers. When the caterpillar takes a bite of your leaf, it dies. It interferes with their digestive system. You can buy it at a nursery. Usually the big box stores don’t carry it. The only bad thing about Bt, is that is washes off with the rain and must be reapplied. 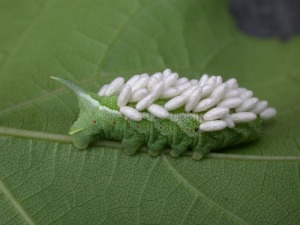 The other thing that is helpful comes from nature itself.  If you see little white cocoon things on the hornworm, leave them alone as a helpful parasitic wasp has layed their eggs on them and the caterpillar will soon die. An added bonus is all the little wasps will attack other hornworm caterpillars. The wasp is not like the wasp we think of that stings us. It is a little thing, almost fly like, doesn’t sting us and is one of those beneficial bugs you would like to have in your garden.