Picked up some French Fingerling potatoes last week and am chitting them for the next 1-2 weeks. Chitting potatoes is basically growing out the eyes a little in indirect light, giving them a head start before planting them. I’m using egg cartons to keep them from rolling and breaking the eyes. Also I got the vegetable bed ready, picking a rich, loamy and deep bed (but not the same one as last year) added more manure, dug it in, and dug the trenches 8 inches deep. As soon as they are ready, I will plant them in the bottom of the trench covering them with 3 inches of soil and after the plants are 6″ tall I will start to mound up the dirt around the plants. Last year was my first year growing potatoes and they were fabulous–so much better than store-bought ones. 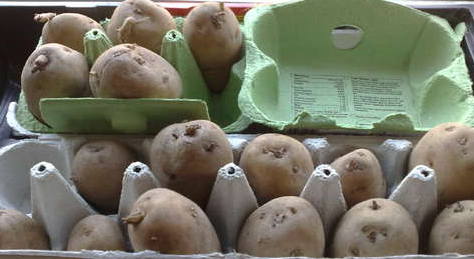 A gardening friend of mine, Gene asked me to explain ‘Chitting Potatoes’. Why do we want to chit potatoes? It will knock off a couple of weeks to harvest time so you’ll get them sooner. Now I am new to this myself being a first year potato grower but basically it is ‘prespouting’ the potatoes to force healthy new sprouts before you plant the potato ‘seeds’. Potato seeds are not seeds at all but the actual potatoes.  We keep potatoes we want to eat in the dark so they won’t turn green and quite often they start to develop smaller flimsy white sprouts while in the dark but what you want is thicker healthier sprouts that are either green or purple. If you missed the opportunity to chit the potatoes, it’s ok to just plant them when the time is right. I’m going to try growing fingerlings-Russian Banana, Purple Peruvian and French fingerlings.

Here’s how to ‘chit ‘ them (sounds southern doesn’t it?!)

1. Get a couple of egg cartons so you can stand the potatoes with the pointed side down. The blunt side generally produces more sprouts so keep that side up. The egg cartons make it easy to support them this way. Sometimes there is no pointy side which you should then just look at your potato and put the side with the most ‘eyes’ or sprouts up.

2. Put them in a cool space that gets good light in your house and they will develop thick sprouts  in 2-4 weeks instead of those flimsy one that grow in the dark.

3. Plant them outdoors when the soil is 50°F or warmer. There are many ways to plant potatoes which you can research on the net but I’m going to dig a deep trench about 10 inches deep in heavily amended fluffy soil.

4. Place the presprouted (or chitted) potatoes with the sprouts up (the sprouts become the leaves) and bury them 4-6 inches deep depending on the size of the potato. BE CAREFUL NOT TO BREAK OFF THE SPROUTS. Spacing them 12 inches apart and rows 12-24 inches apart.

5. After the sprouts come up and they get leaves, I’m going to start filling straw around the plants instead of dirt to make access to the potatoes easier come harvest time. I hope they stay cool enough with the straw.

6. I should see the sprouts come up through the dirt in a couple of weeks. If it is still freezing at night, I will cover the plants with row cover.

7. Potatoes will start producing tubers when they flower.

8. Fingerling potatoes should be ready to harvest when the plants die back in about 90 days. Leave in the ground 2 weeks to harden off before harvesting.

For more information on growing and buying good potato seed go to: http://www.irisheyesgardenseeds.com/growers10.php