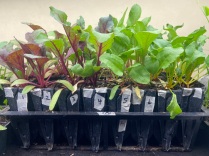 In addition to being able to go back to the nurseries which is fantastic, please don’t forget to support the tiny growers and farmers mentioned in the previous post as well-there is room for all! Here is what was released. Looks like the petition worked! This will help all the nurseries.

‘Gov. Michelle Lujan Grisham’s office said it has reversed course on its closure of plant nurseries and will allow them to provide curbside and delivery to customers. Following the last round of emergency orders, nurseries lost their essential service status, leaving many of them concerned about their live plant stock. Thousands signed a petition asking the governor to allow nurseries some capacity to operate, a request she said she was considering during last week’s public briefing. “They must take all necessary social distancing precautions and must continue to abide by the mass gathering rule,” Lujan Grisham’s press secretary Nora Meyers Sackett told SFR via email yesterday.

Agua Fria Nursery owner Bob Pennington tells SFR he plans to offer both delivery and curbside. “We can hire back some employees, we can pay some bills, we won’t go totally down the tube,” he said.’

IN ADDITION: I think all nurseries are open now but suggest you call them individually to see what their protocol is regarding shopping. The people from Paynes emailed me and asked if I would give this info:

2 comments on “Nurseries allowed to reopen!”