I want to heat the greenhouse in the winter using passive solar methods. There is nothing growing in it so far this winter but I’m doing some experimenting to see how warm I can get it (my goal is around 32°F or warmer) at night. To this end I’m experimenting using compost to help heat it, putting some barrels with water in them to act as a heat sinks and I’m insulating the structure inside a little better so as not to lose so much heat at night. If the sun shines, it gets between 70-80° in the day right now (which is delightful) and I’d like to keep some of that heat in at night and not lose it. Of course I had the opposite problem last summer when it got too hot but that’s another problem I’ll address this summer! 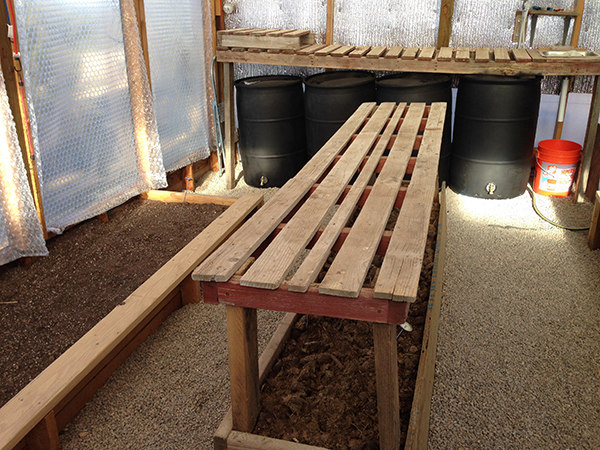 The center bench has compost underneath it in a raised bed

The compost pile is only 1/2 a yard so is probably not enough to keep it significantly warmer  inside the greenhouse but what if it adds a degree or two? I’ll take it. Everything helps. The compost pile got up to 112°F  while the surrounding soil in the two raised beds is 40°F. Not that I’m planting in the compost but it shows it is significantly warmer. Now it has cooled down to 60°. The night temperatures are still below freezing inside.

Since I didn’t have a chance make shutters for the screen windows before winter set in, my friend, Jody, thought of putting plastic on both sides of the open screen ‘windows’ to trap warm air and slow the heat loss. I’ve done that now. 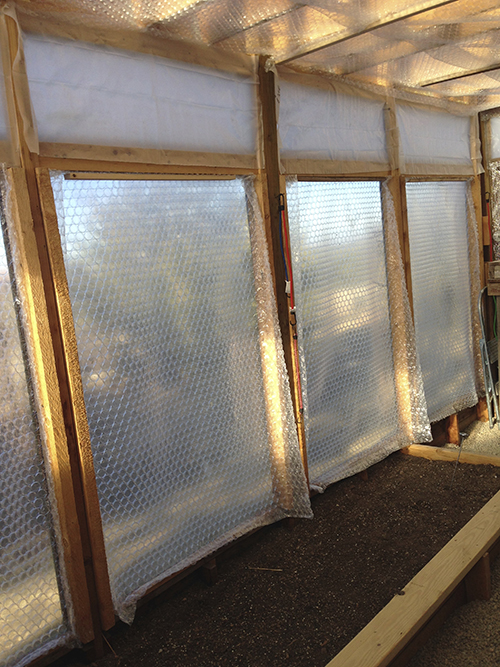 I just put bubble wrap on the windows to hopefully act as insulation to slow the loss of heat at night as well. Plus I added bubble wrap on the ceiling between the rafters. Elodie said probably a lot of heat is loss up there through the uninsulated fiberglass roof. Now the green house looks like a  bubble wrap house on the inside! The night temperatures are still below freezing inside. 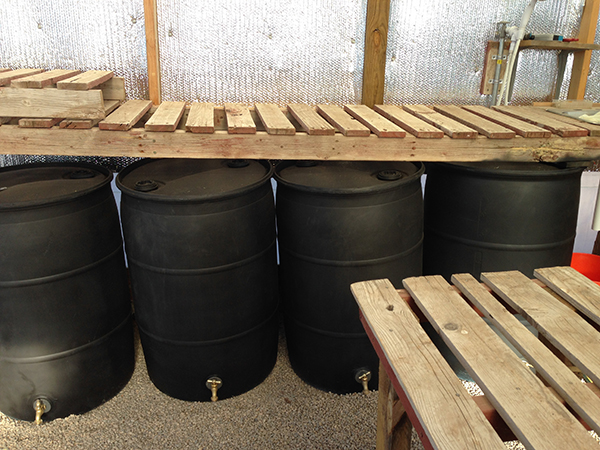 I also have 4 rain barrels that I painted black and filled with water and installed hose bibs on the bottom so I can empty the water out at the end of winter. I put them under the growing tables and the night temperatures are still below freezing inside. And lastly I plugged up a lot of leaks where the roof meets the rafters.

Did it work? Are my nighttime temperatures above freezing? NOPE. I’ve only been able to keep it about 5 degrees warmer than the outside temperature which make me go to plan B.

What is plan B? Try planting only super cold hardy winter greens and see what happens. Stayed tuned…