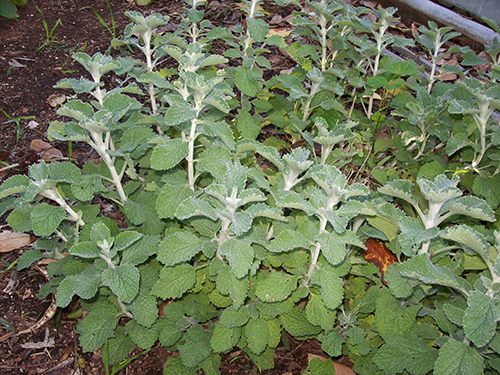 There is a plant that grows everywhere around here and I’ve always wondered what it was. Grows like a weed so to speak. I knew it was in the mint family as the stems were square but was definitely not a mint. I just ID it from a book, Weeds of the West.

Since ancient Egypt, white horehound has been used as an expectorant. Native American and Australian Aboriginal medicines have traditionally used white horehound to treat respiratory conditions. Some people make homemade cough drops out of them and some use the dried leaves to make a tea. They actually sell the seeds in Baker Creek Heirloom Seeds but around my place it definitely grows like a weed on its own without my help. I use to pull it out because it is not a particularly attractive plant and frankly grew where I didn’t want it to grow.

But since I became a beekeeper, I noticed the bees are wild about it with its small white flowers, so now I leave it for them. The US Food and Drug Administration banned its use in US made cough drop saying it has no proven benefit. However it is widely used in Europe and you can buy it in European cough drops, just not US made ones.

I recently had pneumonia and a dry hacking cough that would give me fits. The only cough drop that would help stop the coughing that I tried is called ‘Ricola’ Cough Drops’, which is a Swiss made cough drop. Guess what is in those cough drops? Horehound! Only I didn’t know about white horehound, or Ricola cough drops or what that weed was growing in my gardens.  I found all this out while I was recovering and on the computer a lot-how serendipitous!

5 comments on “Is it a weed? White Horehound”