I think Wall of Waters are one of the best early season aids for tomatoes and peppers in cooler areas of the country acting like little greenhouses keeping the plants warm at night, protecting them from our ferocious winds in spring and for getting a great head start for growth but they can be hard to put up around the plants especially if you are trying to do it yourself. I have another post addressing what amendments I use when planting  and how to plant tomatoes  but this primer is about wall of waters. You can still use wall of waters right now as the nights are still very cool for tomatoes and peppers. 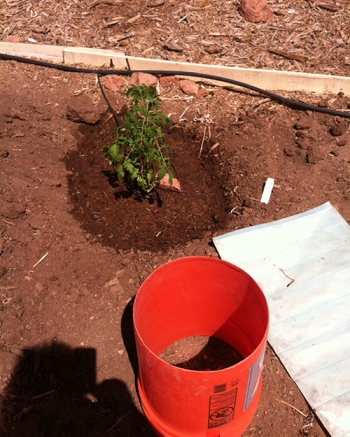 Here is the planted tomato with a big well around it. If the well isn’t big enough than the wall of water will sit lopsided. (I still had to put the drip line around the plant BEFORE I put the wall of water on it). Notice the green wall of water on the ground and the 5 gallon bucket. Some tomatoes are too tall for the bucket so I cut off the bottom of this 5 gallon bucket, first using a drill bit to drill a hole big enough so my sawzall tool could get inside and cut off the circular bottom. The bucket can go over the plant without smashing it over tall tomatoes.

Put the bucket over the plant and then slide the wall of water (henceforth known as WOW) over the bucket. 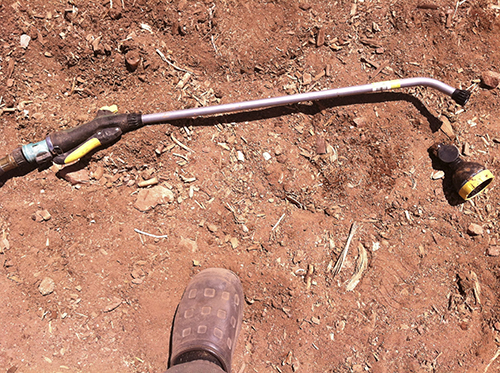 Another great tool for filling the WOWs is this watering wand. I like this one because it has an on-off switch and a lever for control of how fast the water comes out. Here I took off the end so it will fit easily inside each cell. (this is my favorite gardening shoe-can you tell-well worn?!!) 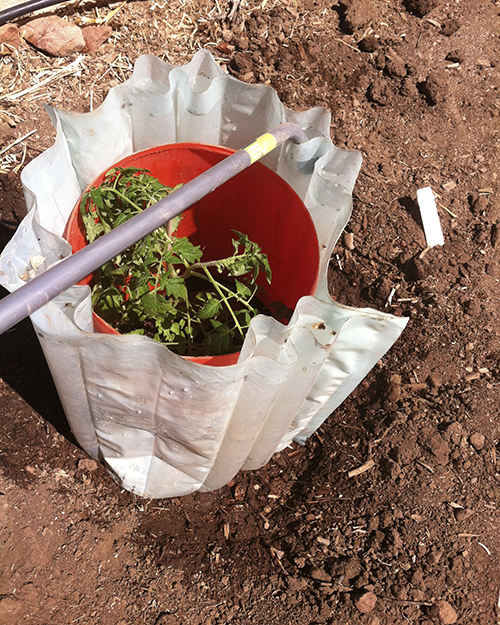 Now put the wand into each ‘cell’ and fill with water. The 5 gallon bucket will keep the WOW from falling on the plant.

Fill a couple of cells, then go to the OPPOSITE side and fill a couple of cells and do this on all 4 sides instead of starting on one cell and going around where it will have a tendency to collapse. This will help the WOW to stand up better as you fill up the cells.

After filling all the cells, reach in a pull the 5 gallon bucket out and the WOW will now support itself. A perfect little greenhouse. But sometimes… 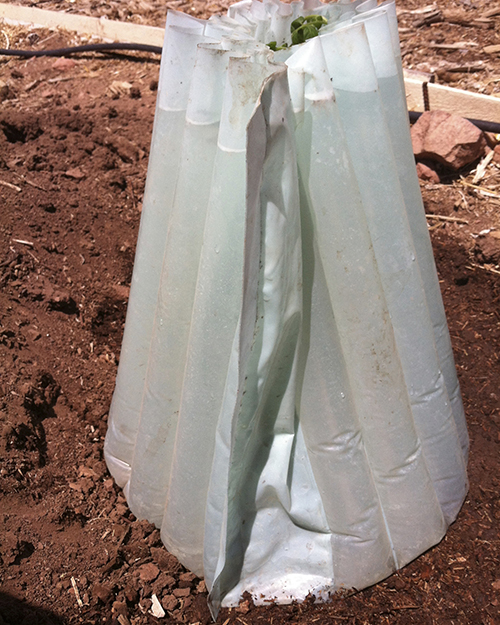 a cell will get a hole and leak after the WOW is a few years old. This is a problem as the WOW needs every cell  full to support itself, so…

Take your replacement cell and fold it lengthwise in half as shown and slide it into the cell where the water leaked out.

Then fill up the replacement cell with water and it will hold up that cell. Now one last thing…

I put 3 bamboo stakes inside the WOW’s right next to the walls and make a tee-pee out of them and tie them together at the top in case the WOW wants to collapse from the wind, the tee-pee will hold the WOW up so it doesn’t crush the plant. These plants have been inside the WOWs for a while and I will take off the WOWs now. Just grab the WOW on opposite sides and pull them off the plant and dump the water back in the wells.