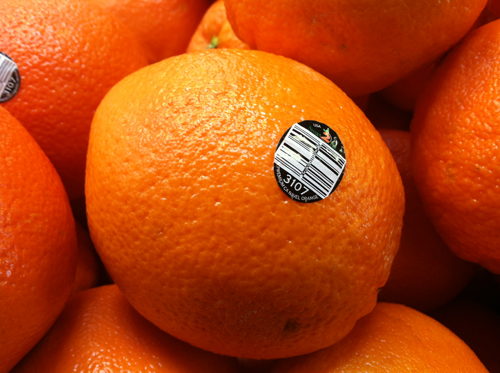 Is this orange conventional, organic or GMO?

A friend ask me the other day if there is produce out in the supermarkets that are GMO’s. I did some research and I found out that those tags we see on the fruits and vegetables in the produce section of your grocery store actually give us more information than the price. The tags are called PLU numbers-PLU stands for ‘Price Look Up’. So I went to all the grocery stores here in Santa Fe and did some detective work! I snooped around the produce section with my iphone taking pictures of the tags on the produce looking for GMO produce. Luckily no one from the stores asked me what the hell I was doing! The good news is that I didn’t find any GMO produce (fruits/veggies) here in Santa Fe in the supermarkets. Now that doesn’t mean there aren’t any GMO foods in the grocery store (I’ll talk about that in a later post), just not any fresh produce (veggies/fruits) that are on the shelves right now. Notice I said right now because there are a few items in the produce section that could show up as GMOs in the future—namely corn and some papayas. I  only saw them now as conventionally grown.

So here is the info you’ll need to tell if your fruit or veggie is a GMO. All the stores but Trader Joes use similar PLU tags on their produce. TJ’s has their own tagging system so this info won’t apply to them.

If your tag is a 4-digit number, then it is CONVENTIONALLY GROWN which means the grower could use chemical pesticides and fertilizers on it but it is not a GMO so the orange at the top of the post and the banana above are examples of conventionally grown produce. 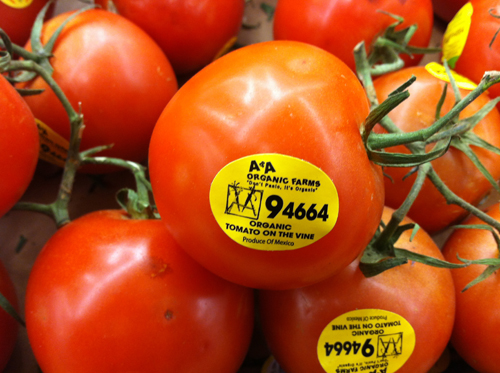 If your tag is a 5-digit number, and it starts with a 9, then it is ORGANICALLY GROWN and if it is organically grown than it is not a GMO. In fact ALL organic foods are not GMO’s.

Now if your tag is a 5-digit number, and it starts with an 8, then it is a GMO. Like I said above, I couldn’t find any produce in Santa Fe with a 5 digit number starting with an 8 to take a picture of. Well, that’s a relief!

When I go to the grocery store I can never remember which number the GMO starts with while I’m there so I made up this little diddy to help me remember: