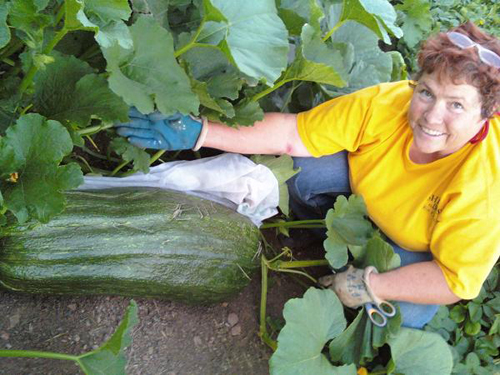 Ooo wee! Check out this giant marrow (which is actually a giant zucchini)! I don’t know how one measures for weight but I have several really big ones. One will go to the State Fair and the other up to the Rocky Mountain Giant Vegetable Growers weigh off in Colorado if I can get it to last that long. It has been really fun growing it this year and watching the marrows grow. The Plant does fine in the heat and ultraviolet rays (we are 7000 ft high here in Santa Fe). No wilting at all. Grows like crazy. The only thing I will change next year is that it will go in the giant pumpkin patch where it will have more room to grow. It can duke it our with the giant pumpkins! Right now it is growing over everything and I already hacked it back twice!  This one came from a seed from Brad Wuersten in the Netherlands who has the European World Record for it over there and was kind enough to give me a seed from one of his giant marrows.

2 comments on “Check out my giant marrow!”