So my greens made it through the worst of winter (I hope) and have really started to kick in growing. They went on hold (stopped growing) from around Thanksgiving to mid-January when we had less than 10 hours of daylight. But since then the daylight hours keep increasing daily which is a signal for the plants to grow again in earnest. In case you are wondering when I planted all this, I planted the carrots, arugula and spinach last September inside the greenhouse, and the red and green lettuces I started from seed under grow lights inside my house on January 2nd and then were put out in the greenhouse in early February.

To keep the greens from freezing in the dead of winter in the greenhouse which is unheated, I’ve cover them with one layer of winter weight row cover every night and on some really cold nights (when temperatures got down to 14-17° F), I put two rows of row cover over them. One night the lettuce actually froze. But I read in Elliot Coleman’s Winter Harvest Handbook that if you don’t harvest it when it’s frozen, it may be fine by the afternoon when it warms up and sure enuf, it thawed out and is still growing great. You just can’t harvest it when it’s in a frozen state.

My Greenhouse a few summers ago

In the greenhouse are some carrots which aren’t very big yet (about the size of a pencil in circumference) some green and red lettuces, arugula and spinach, all of which will be harvested before the Green House (a play on the word greenhouse since my greenhouse was painted green) gets too hot. In fact when the day temperatures reach the 50’s, I put fans on to blow the heat out of the greenhouse. 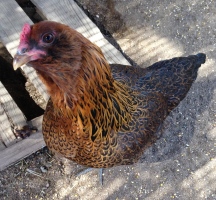 Looks like some of the lettuce and spinach are now big enough to pick the outer leaves while leaving the inner leaves to continue to grow. And a big bonus for me is to see so much green now already at the start of March! I love going into the greenhouse right now. Refreshing when the outdoor plants are still sleeping…

Here is some lettuce I harvested from my unheated greenhouse on January 16th! I’ve been experimenting growing some cold hardy lettuce varieties (Winter Wunder and Marshall Red Romaine) this winter.  I told you I would report back and here is my first harvest. I find it amazing that they survived some very cold nights 6 to 8°F (-14 to -13°C for my European friends) in the greenhouse with only some winter weight row cover over them for added protection. I planted them from transplants instead of seeds in November so they had a good head start. It’s really fun to see something ‘green’ growing this time of year and yummy too.