Here is what happened in my garden in 2016. Wow-what a weird but interesting year mother nature threw at us.  It looks like over and over again I could have planted earlier in hind site.

I use a seed starting soil called Metro mix 300 from Agua Fria Nursery. I plant seeds in very small seed flats (see here). I transplanted up 2 times using a soil mix called Moonshine, also available at  Agua Fria Nursery. Growth was unbelievable with this stuff. I grew my best tomato transplants ever this past year. All warm crop seeds were planted and brought inside and placed on heat mats and under lights as it is too cold to keep them in an unheated greenhouse. All cool season crops were brought inside and under lights but no heat mat, they germinate at a lower temperature.

APRIL
Normal spring weather pattern. Cold one day and warm the next. Windy.

–Tomato seeds were planted on April 15 which is late BUT it worked because I used the soil mix Moonshine when transplanting up to a 4 pak from the seed flats (see post above). Moonshine makes everything grow faster.  I think I should have planted the seeds on March 25.

–Eggplant and pepper seeds were planted on April 15th with the rest of the tomato seeds and they should have been planted 10 weeks before putting them outside in the ground.  So that means I should have planted them on March 15 to plant them outside by June 1. I’ll remember that this year!

–Basil, kale and chard seeds were planted in early April. Did well but I should have started the seeds in March. Transplanted 2x before being planted outside in early May.

MAY
May was warmer than usual. No late frosts. Windy as usual.

-Potatoes were planted May 3. Could have planted them sooner.

–Tomatoes were transplanted to 2″ pots on May 6.

–Tomato plants were transplanted outside in wall of waters by May 24. This was late but they caught up as the soil was warmer.

– The soil was too cold for any other warm season crops to be direct seeded.

-Kale, chard and onions were transplanted outside in early May. Probably should have put them outside in late April as they can handle cold nights with row cover over them. Need to remember that! Transplanted all different types of basil outside in late May under shade cloth.

JUNE
June was a hot month averaging 94 degrees with little rain and lots of winds.

–Pepper and eggplant were transplanted  in garden with row cover protecting them from June 1-4 when the soil was warmer, not May 15. I have experienced them going into shock if planted earlier when the soil is still cold.

-Leeks and basil plants were transplanted with shade cloth over them in early June. They both loved the semi-shade and the basils didn’t flower so fast in the heat-huge harvest of them this year. My three favorite basils were Genovese (or Italian) Thai and Lime Basil (had to grow this one from seed). I grew Lemon basil as well but I have enough lemon scented herbs with lemon verbena and lemon thyme, so I will pass on that one next year. 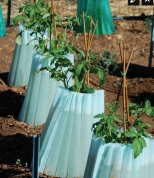 -The wall of waters came off the tomatoes in early June and the plants had their drip lines put around the plants, straw was placed around their wells to help retain water, tomato cage put on and immediately put row cover over all the rows of tomatoes to keep the leafhopper from biting them and giving them a disease called Curly top Virus.

–Eggplant/pepper plants were transplanted outside by June 9th with row cover over them. They loved the warm days throughout the season this year.

-Warm season crops like beans and cucumbers were direct seeded outside in June. I had a big problem with rolly pollys eating the seedlings as soon as they sprouted. Planted seeds for both crops 3x and only when I used Sluggo Plus did the problem go away and it’s organic too. But the cucumbers didn’t have enough time to grow to fruit and I never got good pollination due to the hot days in June, July and August. No pickles this year. Wah!

-Instead of a green pole bean, this year, I tried a new pole bean called Marvel of Venice and I didn’t like it at all. They were suppose to be yellow but by the time they turned yellow, they were tough and not much flavor. Will not plant them again.

JULY
July was stinking hot averaging 94 degrees with no monsoons. The heat affected the plants adversely. We never get this hot day in and day out in July.

-I was expecting the monsoons to come by the second week in July and they did not. July was very hot averaging 94 degrees and blossom drop was extensive on tomato, cucumber, squash and bean plants—so very little fruit set. I didn’t take off the row covers on the tomato plants because the leaf hopper bug which likes dry, hot windy conditions and (transmits Curly Top Virus -CTV) was still present. I thought OMG, am I going to have to keep the row cover on all season? Luckily August weather changed.

Summer squash got a wilt this year and it wasn’t from the squash vine borer as they were covered with row cover. They died before getting any fruit. Can you imagine, I had to ask people for summer squash this year!

Waltham Butternut and Butternut Rugosa were my winter squash this year. Both did well. I heard they don’t get squash bugs and for me it was true, I didn’t have any squash bugs on them which was great. Good varieties to grow if squash bugs are your nemesis. I will grow them again.

-My giant pumpkins once again couldn’t set blossoms in late June-early July when they should and didn’t set any fruit until August because of the heat and by then it was too late to get big-my biggest was the size of a basketball! Once again foiled. Will try next year again!

AUGUST
The monsoons finally came in August but not a lot. Still, it cooled down things.

–Tomato blossoms finally set but we lost 2 months of growing time. Took off the row covers once it cooled down. Unfortunately, when the monsoons came, the nights got cold- in the low 50’s which slows down the growth of tomatoes but at least I had tomatoes! By mid August I had 2 boxes of tomatoes which wasn’t enough to warrant going to the Farmers Market. Normally I have 6+ boxes mid August increasing to 10-12 boxes by the end of August. Not so this year.

-The peppers and eggplants however, loved the heat and were very prolific this season.

-Kale and onions did very well, they don’t mind the heat or the cold! 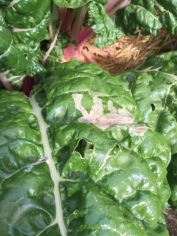 –Chard got leaf miners and I battled them all summer but still harvested a lot.

Turned off drip lines to Giant pumpkins, summer squash in August as they didn’t do well.

-Weeds, oh yea, weeds-they were prolific once the rain did come and I didn’t get on them right away so the battle was on but since I decided I wasn’t going to market and wasn’t on any tours this year, I decided to not be so diligent about weeds and picked them at a more leisurely pace to just enjoy the garden. Plus I went on more flyfishing trips this past summer!

-This month the tomatoes continue to grow but more slowly and harvest continues. Only lost 2 plants out of 40 plants to CTV disease this year. Because of little rain, fungal disease was at an all time low which usually hits the tomatoes in Aug-Sept.

-Planted my gorgeous garlic. Varieties were Chenok Red, Music and German White + some Stanley garlic from the SF Farmers Market. Hope they do well next summer at harvest time. Usually I plant garlic in October but I taught a garlic class in Sept and put them in then.

-Beets and Carrots-did well and started harvesting in Sept.

-I didn’t use any organic fungicides or insecticides this year as pressure was lite.

-Potato size during harvest this month were smaller. I think I should have watered them more. Will try a bigger variety next year. i tried them in Potato bags and directly in the soil. No difference.

Kale got aphids worse-sprayed them with water and still harvested a lot. The really bad ones with aphids I gave to the chickens-they loved it!

NOVEMBER
Unbelievabley no hard freeze until Nov 9th! I haven’t seen it this warm in November-normally we get a hard freeze in October but not this year!

DECEMBER
Pretty normal December weather but not much precipitation.

-Cleaned out garden but didn’t have time to add compost to beds. Will add it next spring.

FRUIT
This year was pretty good for fruit. By far the most prolific fruit this year were apples.

Strawberries- did ok but I’d like to amend the beds this year for better production.

Rhubarb did well until I lost one to a fungal disease called red leaf disease. I still have one left which is actually enough.

Apricots-Since we didn’t get a late frost this year, we had a little apricot crop (very little) but hey, it’s been 7 years since I’ve had ANY apricots. Got about 8 jars of apricot jam from them. I just enjoy the tree as a shade tree mostly.

Grapes-My Himrod grapes did great this year. Loved them.

Raspberries-This was the first season for them (they were planted last fall) so production was low.

Blackberries-Just planted in the spring. They got established and hopefully I will get some next year. Looking forward to it.

Apple trees-They were very prolific in the fall as we didn’t get a late frost this year. Dried many apples and this year made hard apple cider.

Plum trees and peach trees did not do well and I will replace them next year (they are old) with better varieties of peach and pear trees that will do well here. Will get them from Tooleys Trees in the spring.