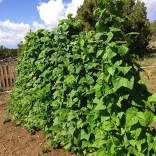 Here is what Tarbais (pronounced Taar bay) beans looks like on the vine and closeup, after dried but before shelling and when shelled in jars. I like to cook and wanted to learn how to make a french dish called ‘Cassoulet’ last year (2012) and had a heck of a time finding this particular bean that hails from France where I would have to pay $34.00 an ounce for heirloom Tarbais beans ! That’s because our USDA and the cost of their inspections drives up the price to get them into the US. The ones to grow can be different from the beans to eat. The ones you can purchase to eat might not be a true heirloom, mixing genetically with other beans but they will taste the same unless you try to grow them out.  The heirloom variety were not in any seed catalog last year but I finally found 4 people who offered their heirloom seeds through Seed Savers Exchange (SSE) in their Members Catalog ($4 for shipping only) and each gave a lot of beans (30+). Well worth joining because 1) you are supporting growing heirloom seeds and 2) many people grow unusual vegetables and offer their seeds through SSE. They were the only ones who had them in 2012 in the US. This year (2013) I saw them offered at Baker Heirloom Seeds in their catalog and got more although now I have my own supply of them as well. 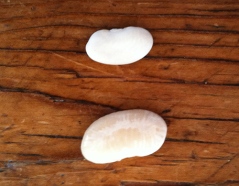 So what’s so special about the Tarbais bean? I probably could have used a white Navy bean but I read that the Tarbais bean is slightly bigger and becomes creamy without disintegrating and becoming mushy like many other beans do and I wanted to be authentic and grow out that variety of bean.

The Tarbais bean originally came from the village of Tarbais, in southwestern France and is used in cassoulet dishes. Tarbais beans were developed by generations of farmers that lived in that area. The Tarbais Bean in 2000 obtained IGP status (Indication of Protected Geographical Origin). Only members of a small, closed cooperative in Tarbais are allowed to use that name for their beans, and production is tightly regulated. The original seed is a New World runner bean (Phaseolus coccineus) and most think it originated in Mexico.

That’s one of the great things about growing your own vegetables-you can grow something you might not find in the grocery store. That doesn’t mean it will taste exactly the same as where it originated from (like I doubt a New Mexico chili grown in New Jersey would taste the same as our conditions and soil are very different) but at least I could try. The beans are grown like any pole bean that you are going to leave on the vine until dried. They were harder to start as the birds liked the ‘bean sprouts’ when they popped up so I had to replant several times and cover them with row cover to protect them until they were about 3 inches tall. After that it was a breeze. Just water them regularly. They will produce many pods that you just leave on until fall when they dry on the plant.

Part 2 of this will be the about Cassoulets and the recipe I used.