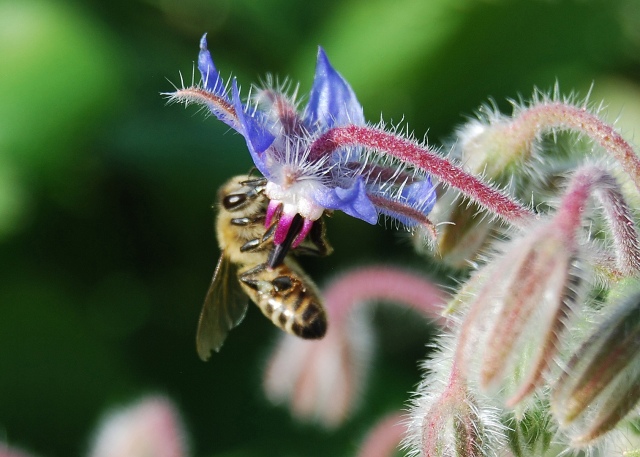 Bee on a borage flower—Photo courtesy of Elodie Holmes

I went into my one and only topbar hive today to see how the ‘girls’ were doing and am thrilled to report that they have 18 bars-10 full of honey, 1 bar being built and 7 full of brood. They look to be in really good shape for winter. I didn’t see the queen today as I was in a hurry but that was ok as there was lots of capped brood and larva in those 7 bars and lots of activity with the bees coming in and out of the hive carrying in pollen and nectar.

Around my property right now native plants such as Apache plume, chamisa and asters are all blooming and the bees are loving them. Plus my Russian sage, catmint, spireas, lavender, honeysuckles, Datura, borage and my out of control, drought tolerant silver lace vine (all over my fences) is full of little flowers and the bees are loving all of them as well. I’d say they are truly ‘busy as a bee’.

I can’t tell you how happy and grateful I am for this to have happened as this past June I almost lost all of my bees. Nothing is worse or more depressing for a beekeeper than to not have any bees! My queen had disappeared after winter sometime in late spring, and I suddenly discovered I had only 2 bars with a few hundred bees roaming around aimlessly, not knowing what to do without a queen. I had two friends, Bob Z and Les Crowder each give me 1 bar of brood so the hive could survive until I got a new queen acclimated to the remaining bees. The surviving bees had the new queen lay an egg in a couple of queen cells they made to supersede the queen I bought. This process is called ‘supersedure’ which is the bees way of replacing an existing queen in the hive with a new queen without a beekeeper’s interference. They obviously wanted to raise their own queen instead of accepting the one I bought. The queen I bought ‘disappeared’ and a new queen of their choosing emerged and took over. The rest is history. She has been one kick-ass queen to build up her hive so big in such a short time. I just hope no bear will come by this far south but they are always worrisome in the fall and one has been seen not too far away. I’ll keep my fingers crossed it doesn’t come my way.

6 comments on “My bee hive looks good going into fall!”