Well I culled the last little pumpkin on the 895 Grande pumpkin plant, leaving one giant pumpkin who I’ve named ‘MAX’ to suck up all the juice. 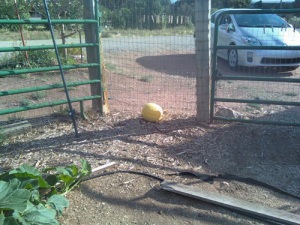 This last little one wasn’t growing for 4 days so I culled it. I only hope nothing happens to MAX that will ruin  my season. It hit 216 lb benchmark today. Hope the rest of August and all of September are WARM which will help put on the LBS! It has been putting on 13 lbs A DAY for a week now which isn’t a lot in the giant pumpkin world, but I’ll take it here at 7000 ft elevation. It is on the main vine but only 8 feet out. Giant pumpkin growers like to wait till the blossoms are 10 feet+ out from the main vine to pollinate.  I thought it would be the one I would have to cull later. But noooooo, MAX decided it wants the vine all to itself robbing all the other little pumpkins of nutrients (juice) and the plant is not putting out anymore female flowers either which is good-all the energy is going to MAX now as it wants!

Just to put this in perspective on this date, August 16 of last year, KING KONG, who became the NM State Record, was 32 lbs! It got pollinated on July 29, and MAX got pollinated on July 10. I figure it has an additional 2-3 weeks to grow bigger than Kong  IF the weather stays warm at night. Wish for a Indian Summer for me… GROW NAGUAS, GROW! (Chinese for grow pumpkins, grow!)