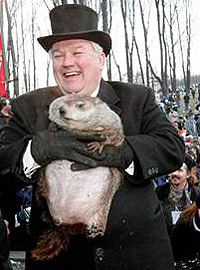 Just released from Wikileaks: Coming up on Wednesday Feb 2, 2011 is Ground Hog’s Day. Phil, the famous Punxsutawney groundhog will come out of his home (Gobblers Knob) in England and predict whether we will have more winter weather or not. Unbeknown to everyone, Phil has a little brother Bobbi that I discovered and introduced last year on Ground Hog Day.  You can read the original post here. 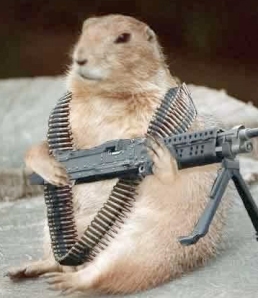 Bobbi, Phil’s little brother, is a radical left wing groundhog, one of the original Chicago weathermen group, currently living in Ireland.  Bobbi who has long been jealous of his older brother’s notoriety has  been planning a coup on Gobbler’s Hill since last year. Rumor has it it he has a ground hog militia ready for his takeover of Gobbler’s Hill and exile of his brother Phil from England and plans his attack on Ground Hog Day. Bobbi sees his brother getting fat, old and egotistical with all the attention he gets each year and is sick of it. Some of the changes he wants that have not been addressed in the ground hog world are: mandatory retirement age for Phil the groundhog (Phil’s been in too long), paid admission to see the groundhog every year when he comes out, better food for the groundhogs, better housing, social security benefits, health insurance and secret service protection from those crazy humans who might want to kill them thinking they are gophers. Phil on the other hand, got wind of his brother’s plan and has added extra security for himself  and his staff. On Ground Hog’s Day more than just the weather prediction might happen. Stay tuned for the real story..