I had my friend Lava, enter 3 zucchinis in the New Mexico State Fair in Albuquerque last Tuesday for me while I’ve been gone in NYC. One (the smallest) was a traditional zucchini, and 2 were giant varieties called marrows. A marrow is in the zucchini family-Curcurbita Pepo. It is grown more in Europe than in the states. It is eaten when small but the giant varieties have the capacity to get big-really big-much bigger than our ordinary variety of zucchini! I weighed my two smaller marrows that I entered into the fair on my bathroom scale and one was about 25 lbs and the other was around 35 lbs. I wonder if anyone in NM is growing a giant variety of marrow. I didn’t even weigh my traditional zucchini because it was so small compared to the giant varieties. I am going down to the fair today to see if I got any ribbons.. 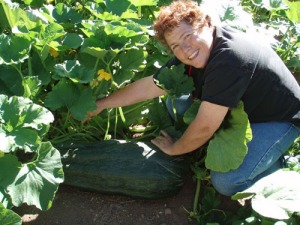 Getting ready to measure the biggest marrow

I still left the biggest marrow in the patch to see how big it will grow before the Colorado weigh-offs. It measured almost 30″ long and 14″ wide about a week ago. I think it weighs about 45 lbs right now. Here is a pic of me getting ready to weigh it. 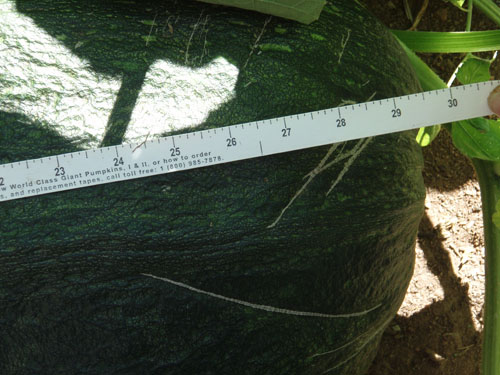 I love the marrows-one of the most exciting plants I grew this year. I’ll have to harvest some seeds, although they were probably cross-pollinated by the bees with my winter squash. I’m still going to keep some seeds..

I also entered in ‘Harpie’, one of my two giant pumpkins. Lava said it officially weighed 99 lbs at the fair. I don’t think it will place but I’m gonna try! 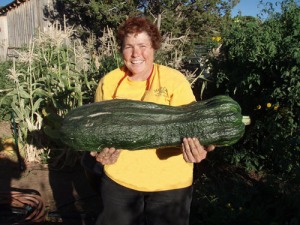 biggest marrow that went to the fair-35 lbs! 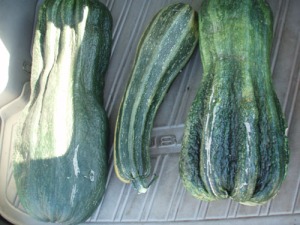 See the difference between a marrow and a regular zucchini?! 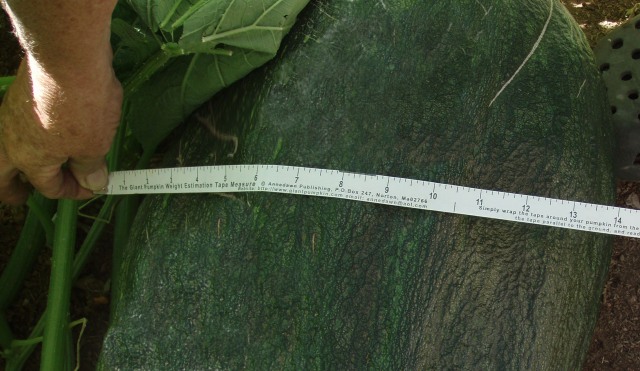