So the 945 N. Harp pumpkin flower that I said was almost ready to open, did this morning as pictured above. That was really fast to open. So I got some male flowers off the same plant that had pollen and broke them off, stripped away the petals and used them like a little paintbrush to go all around the outside and also inside the stigma. Notice this stigma has 5 segments. Most big pumpkins have 4 or 5 segments and some have 6 but many of the six segment ones abort due to insufficient pollination. 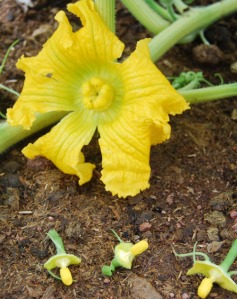 female flower with male flowers around it after hand pollination

The next picture is of the flower after I hand pollinated it with the ‘spent’ stamens in front of it. I almost feel like smoking a cigarette!

The last picture is where I closed up the flower with a twistie tie so the bees won’t accidentally pollinate it with another pumpkin’s pollen. By controlling pollination, I try to control (somewhat) what the future seeds of the pumpkin will be but it won’t affect this year’s pumpkin and what it will look like only it’s seeds.